Guild Wars is a multi-day battle mode between Guilds. Gain War Points by depleting the Health of other Guilds. If your Guild is killed, you have to wait 15 minutes before you can respawn and get back in the action! Each Guild receives special bonuses based on their stats and equipped items. The more Guilds you destroy, the more War Points you get and the bigger your prize (Gold, XP and Favor Points) will be!

The Guild leader or officer can register a Guild for a War, once registered other members can join. Your Guild must have been established for a minimum of two weeks in order to participate.

Guilds are placed in Division tiers A through E (A being the highest and E the lowest). Your division tier is calculated by your total guild skills (top 15 members) against all others who have opted into the war.

Strength is based on the top 15 members per guild who opt in for Guild Wars. Their stats. all contribute to the Guilds attack, defence and health. If you have less than 15 members opting in then the stats. of all registered members are used. Once a war begins the stats. are locked for the duration of the war and the only one you can influence is stamina.

Each player is equipped with the base strengths of their guild along with their own individual armed attack, defence and  health strength which contributes to their minimums damage when in action.

Along with taking your total guild strengths into battle, there is also some variability added in each attack using the following Perk. Attack - Minimum Damage Bonus - The greater percentage of skills in attack and your armed attack is the more minimum damage you will do to a target. Defence - Energy Heal Bonus - The greater percentage of skills in defense and your armed defence the more you can heal your guild.

At the start of a war your guild will be at full health and each member playing will be supplied with 200 Guild War tokens. These regenerate at a rate of 1 every 160 seconds up to a maximum of 300. This means that from zero points to full, without using refills would take 13 hours and 20 minutes.

You can use up to four refills of 50 tokens each per day. You can either buy these yourself or be gifted them by another player. To gift another player with tokens click on the members link on the page, find the member then click on their token count to gift them 50 tokens at a time. Like your own refills this will cost you 3 favor points. If they have less than 300 tokens the gift will be accepted but will fail if they have more. If you have the favor points is is theoretically possible for you to gift everybody in your Guild War team a refill if they have had less than their allotment. This would result in them having one less refill to use.

Using refills it is possible to go above the 300 GWT limit but none can be added if you have 300 or over. You will only start regenerating tokens again once the amount you have falls below 300. You may use a maximum of 16 refills over the course of the war (4 per day). Unused refills are carried over to the next day of the war when you can use any remaining.

For each attack you gain eXPerience and war points (WP) you will also damage your target's health.

Each guild division has its own base WP award when attacked.

If you lose you still get WPs and XP but naturally these are reduced. You only get half the WPs and around 20% of the XP you would have got for a winning attack. Your guild will also lose some health depending on how powerful the target's defence is (you can also lose health for a winning attack).

For each attack you have to decide how many GWT you want to use. You can use an amount from 1 to 3. For each GWT used in an attack the same amount of stamina is consumed. A 3 token attack does roughly 3 times what that of a 1 token attack would do.

During attacks it is also possible to get random battle drops.

If you find a target that is low in health or is particularly easy to beat you may wish to save that target so that you or your guildmates can continue the attack. This is done by targeting. To target a guild hover just to the left of the Attack button and a targeting symbol will appear. Click on this and the guild will appear on the Saved Targets list on the left of the screen.

Targets have to be manually removed by clicking on the appropriate link.

The other use for tokens is to keep your guild's health up. You can only use 1 GWT per healing action and like attack it also requires a stamina point. Apart from adding to your guilds health (up to the maximum allowed) each heal gains you a certain amount of XP and WPs. For healing you will get about 20% of the XP you would get for a winning attack. Unlike attacking the amount of WPs you earn is heavily biased on individual stats not your guild level so a lower ranked player (for Guild Wars) may get more WP than a higher one for the same heal action.

Healing benefits your guild in two ways. Once your guild's health falls below about 20% the amount of GWTs you get begins to go down, a 10 GWP win becomes 9 GWT likewise a 1,000 point kill falls to 900 points so in order to maximise your guild's points a guild needs to keep its health quite high. The other reason is that it may be possible to get higher GWTs for your guild than you would by attacking a higher division guild and without risk. A level D guild attacking a level E for 15 GWT is taking a risk but if they can heal for 16 GWT the guild can only gain.

Apart from the 1 heal per action limit healing is also further restricted by being limited to 400 actions by the guild in an hour (since the first heal occurred). 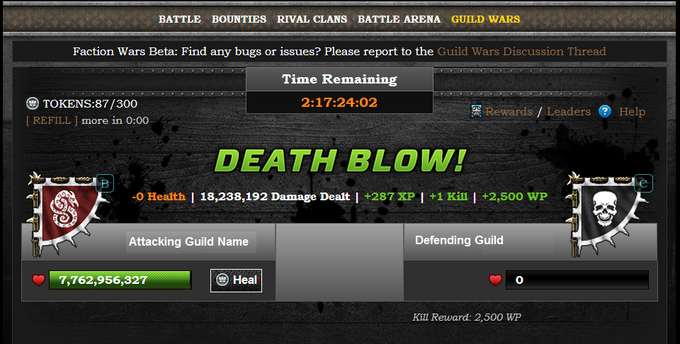 If an attack of yours brings a rival guild's health down to zero you are award a kill. A kill gets you a special GWT payment. For division E guilds this is usually 1,000 and for A around 3,500. As with attacks each division has their own base award for a kill. The kill bonus decreases the more times you kill the same guild.

If your guild is killed you are prevented from taking part for the next 15 minutes. Worse still, you lose the points from the last kill your guild made whether that be 1,000 or 3,500 points. At the end of the 15 minute respawn period your health is fully restored and your 1 hour/400 heals, limit resets.

On top of the XP you get as an individual for competing, approximately the top 20% of participating guilds will be rewarded with the following prizes.

Figures in brackets were the actual bands from an early war

Guild War trophies are planned for a future release.

The Gamer Point (GP) leaderboard competition has a fairly even playing field. If your guild has 25 players and your members can manage their daily 16K GPs there is nothing to stop you being in the top 30 or even coming top if you are quick enough on Sunday.

Guild Wars is not like this as it favours guilds with high level players. For this reason the majority of lower level guilds should see Guild Wars as a risk/retaliation free method of gaining XP and battle drops as only the top 50 guilds get anything extra on top of the XP they get for their attacks.

The best strategy for C - E members of these guilds is every man for himself, zero heals, ignore placement and ignore guild deaths. There is an upside to this though. Not going for placement on the leaderboard does free them from the need to keep the health up and from going for kills.

Not having to heal makes a huge difference to XP. Typically healing only gives 20% of the XP that a successful attack does (a failed attack also seems to give about 20% XP). Not attacking higher level guilds or going after high value kills means that you lose less often so gaining more XP.

The only real downside to this is the 15 minutes respawn period you have to wait out when your guild gets killed. This can be heart-breaking if it happens within 15 minutes of the war's end and you have unspent tokens.

The general rule for these levels seems to be don't hit D or E guilds as they give less WP. This would be a good tactic if it were just a matter of attacking but the situation is complicated by the fact that they do have a chance of making the top 50 for additional rewards. This means they have to take into consider going after kills and healing.

Retrieved from "https://vikingclan.fandom.com/wiki/Guild_Wars?oldid=19625"
Community content is available under CC-BY-SA unless otherwise noted.